Maloja is an HOm model railway based on a planned, but never built, extension to the Swiss metre gauge Rhätische Bahn network in the Canton of Graubűnden. The model is currently owned by myself, Glyn Jones.

The line, known as the Bergeller Bahn, would have gone from St. Moritz in the Upper Engadine Valley, passed the Lakes of Silvaplana and Sils, to the village of Maloja situated at a height of 1803 metres at the summit of the Maloja pass. The line then would have descended the pass, a distance of 22 Km, to the international frontier at Castesegna some 1100 metres below. It would have been quite a feat of railway engineering to conquer the incline without rack assistance. The line would have terminated at the Italian town of Chiavenna some ten Km beyond the border. The planning of the railway was stopped by the start of the First World War and again by the subsequent financial situation. The proposals were finally abandoned in the 1930s.

Maloja was constructed in the late 1980s and early 1990s by David Broomfield from West Malling in Kent. It was Continental Modeller’s “Railway of the Month” for November 1991. After some ten years, and attending many exhibitions, it was sold to Andy Nelson who was Exhibitions Officer for the Swiss Railways Society. Andy had planned the railway for his retirement and subsequent house move and had started to modify Maloja accordingly. Sadly it was not to be and some five weeks after his retirement in 2006 Andy died suddenly. His executors had the task of disposing of the layout quickly.

Having a large quantity of suitable Bemo locomotives and rolling stock, but no layout to run it on, I approached the executors, a deal was done, and Maloja was transported to its new home in the Midlands. Some parts of the layout were in a poor state of repair, the village church was missing and the scenery on the top of the layout had been flattened. What Andy had planned we will never know so I decided to return the layout, as far as possible, to its original state. I also discovered that the station building was missing. This had inadvertently been sold with the original rolling stock! A phone call soon had it reunited with the layout. 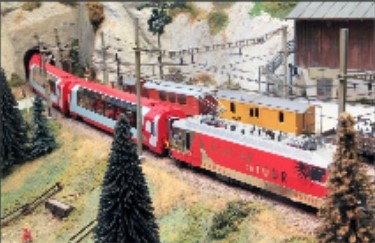